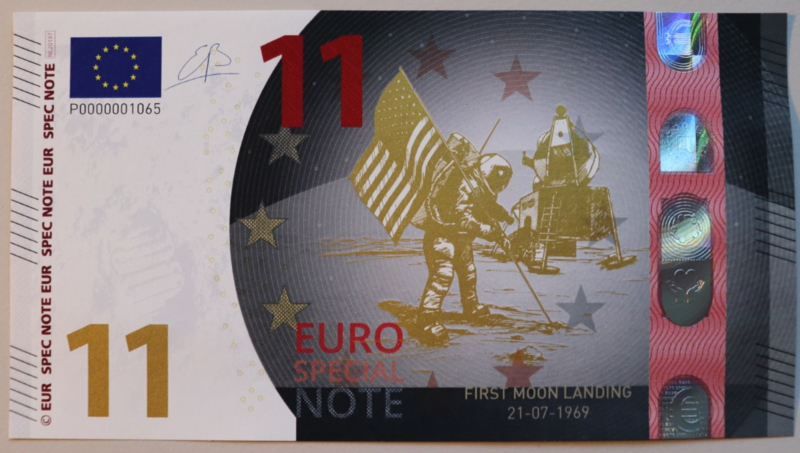 On July 21, 2019, it is exactly 50 years ago that Neil Armstrong spoke the following historical words: "That's one small step for [a] man, one giant leap for mankind" when he first set foot on the Moon. At that moment this could be heard live via television and radio worldwide. The a cannot be heard on the recording, so it is enclosed in brackets.

Aldrin and Armstrong descended to the Moon surface in the Moon Lander, while Collins remained in the Columbia spacecraft. Two minutes and 21 seconds before landing, Armstrong took control of the Moon landing module Eagle and set it down in a flat area. He said the words: "Houston, Tranquility Base here. The Eagle has landed." The Moon landing took place at 20:17:39 UTC, July 20, 1969 exactly 4 days, 6 hours, and 45 minutes after the launch from Cape Canaveral.

Six hours and forty minutes later, Armstrong began his Moon Walk. Arriving at the bottom of the ladder, Amstrong said, "I'm going to step off the LEM now" (referring to the moon lander). He turned and put his left foot on the Moon's surface at 2:56 UTC, July 21, 1969, and then said, "That's one small step for [a] man, one giant leap for mankind". When Armstrong made his famous statement, his words were broadcast live on numerous TV and radio stations around the world.

About fifteen minutes after the first step, Aldrin followed to become the second human to set foot on the Moon. Then the duo began their assignment to investigate how a person can move on the Moon surface. Soon a plaque was unveiled to commemorate their flight and landing and they planted the national flag of the United States. Armstrong spent 2 hours and 31 minutes outside of the Lunar Lander.

After Armstrong and Aldrin returned to the Moon Lander, the hatch was closed and sealed. The Moon Lander flew back into space and coupled with the mothership Columbia. The three astronauts returned safely to Earth and splashed with the Apollo capsule in the Pacific Ocean, where they were picked up by a naval ship.

At the back of the note is Chang'e 4. Almost 50 years after the first moon landing, on January 3, 2019, China succeeded in landing a spacecraft on the back of the moon for the first time in the history of space travel. The moon lander Chang'e 4 is named after a Chinese moon goddess. To land a spacecraft on the back of the moon, two spacecraft were needed: a satellite that takes care of the communication and one for the lander himself. And that lander must also be partly autonomous, because there is a delay of a few seconds on the line. The reverse side of the moon is relatively unknown territory for science. Chang'e 4 has to change that.