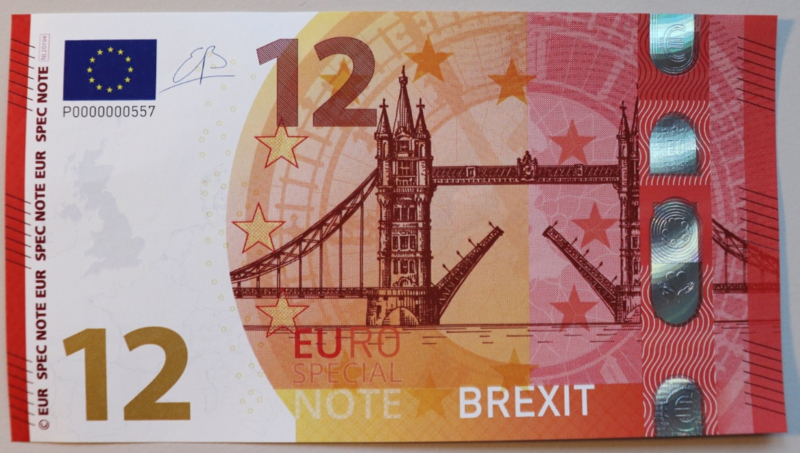 We are pleased to announce that the Brexit Euro Special Note has been added to the note collection of the British Museum in London and the Fitzwilliam Museum in Cambridge.

While the United Kingdom and its politicians were divided over Brexit, most agree it is the most important strategic decision the UK has faced since World War II with major implications to both the UK and the EU. Whatever the final decision would be, history is being made.

United Kingdom and the EU

The start of the current Brexit process was the organisation of a referendum by Prime Minister David Cameron. The referendum has been held on 23 june 2016 in all four countries within the United Kingdom (England, Wales, Scotland and Northern Ireland) and in Gibraltar. A small majority (51,9%) voted for leaving the EU. Formally it was non-binding referendum, but the government had promised to follow the result of the referendum. Prime Minister Cameron, who campaigned against leaving, did step down as a reaction on the result.

The successor of David Cameron, Theresa May, did get the task to lead the negotiations with the EU about leaving. Article 50 of the Treaty of Maastricht, after elaboration in the Treaty of Lissabon (2007), has a procedure to leave the European Union. Following the procedure, the British government did declare to leave on 29 March 2017. As a consequence the United Kingdom would leave the the EU on 29 March 2019 at 23.00 uur local UK time (no deal), unless an other agreement/deal has been made. In the meantime Theresa May and her team has been had negotiations with the EU about the conditions of the leaving deal. In the British Parliament there’s much resistance against the final agreement, in particular about the arrangement of Northern Ireland (backstop). The backstop has to prevent that there will be a hard border between Northern Ireland and Ireland, also because it was agreed at the Good Friday Agreement (1998) that there will never be a border again between Northern Ireland and Ireland. This means that unless there’s an agreement between the United Kingdom and the EU about how it will be solved, the United Kingdom has to stay in the European customs union.

Because of the resistance in the British House of Commons, the European Council has agreed on 22 March 2019 to an extension of the deadline to 22 May 2019 if the British House of Commons would agree to the final agreement, or an extension to 12 April 2019 if there wasn’t a majority at that date. This to have time to get the needed legislation through the British Parliament. On 29 March 2019 the House of Commons voted against the final agreement. After that the United Kingdom got two weeks time to leave the EU with no Brexit-deal or to ask for a long delay to sort out how to leave the EU.

The House of Commons voted with one vote against a No-Deal Brexit. As a consequence Theresa May had to go again to the European Council to ask again for a delay. On 10 April 2019 the United Kingdom got a delay until 30 October 2019: the Halloween delay.

After the postponement, Theresa May was forced by her party to resign and Boris Johnson was elected new prime minister on 23 July 2019.

Boris Johnson signed a new agreement with the European Union on 17 October 2019. As a result of initiative legislation by the British House of Commons aimed at preventing the United Kingdom from leaving the EU without agreement, Johnson was forced to request another delay: this time until 31 January 2020.

Then it was decided to hold new elections on 12-12-2019, so that the British could speak out again.

The number, the shown symbolic icons and persons on the Brexit note are chosen with a reason.

On the front of the note the Tower Bridge is the symbol for the connection between the United Kingdom and the European Union, and the Big Ben clock symbolises the running out of time and the date extensions given.

On the back of the note Queen Elizabeth II is symbol for the unity in the United Kingdom and Sir Winston Churchill for the most important choice since World War II with it’s applicable quote: “There’s nothing wrong with change, if it’s in the right direction”.